From zero to sixty in about six hours

I will be the first to admit that is not my best record for running an arch install. Taking EVERYTHING into account. DVD I/O failure, USB drive not wanting to work. Hard Drive failure and the first install attempt borking after updating (No fatal kernel errors this time!). Anyway after I got it all figured out what to use for the install the legit installation only took about four hours total.

Its not something I am going to do a full documentation on since arch has some AWESOME docs over on their site: Arch Linux: Beginners Install Guide.
Plus that if you don't have an active network connection then you likely should not be playing with this.

So why suddenly move back to arch?
Well I got invited to FOSSCON this year by a fellow in IRC who asked me if I could help out with the Arch "Corner" at the event. Me always loving a social gathering of the nerds decided I would. The issue was I was not running arch at the time. I was running Xubuntu  so I spent most of today running too and fro getting another arch install going.

So whats the story here?
Arch in and of it self is like playing amnesia (no really) when you get started you pretty much wake up with nothing but a terminal... -You know that nice black background with white text thing that hackers and pseudo hackers like to mess with that seems like wizardry to the normal user? That thing. Yep you got it!- This can be a little scary for some users who are used to nice slick streamlined GUI like Gnome, KDE or the Unity. Fear not for the documentation page above will bring you back into the glory of a GUI...and one you pick none the less. -Or you can go all hardcore and stick to the terminal like jack should have stuck to Rose.-

Unlike Ubuntu and its many many many clones (Ubuntu was once a clone....) arch makes you think when using it. Don't just carelessly update your system because it could lead to issues. Read the arch homepage and make sure its safe.  Which leads me to another reason arch is epic: Pacman... no kids not the game pacman in arch stands for Package Manager -See what they did there...? If not, find a wall and go kick it with out and shoes on at full force then come back and look again. Rinse and repeat till you get it- Pacman in arch is like software center in ubuntu... only with out the GUI.... I mean really that is cool.

Anyway I am not here to sell you on installing arch because I am not going to lie its a bitch the first time through. It took me on my first install about 12 -15 hours total to get it running. -Today was only about 4 after getting the initial install going- after this as mentioned before you are dropped into a terminal where the world is your oyster. After you get network running its a good idea to do an update or just you know follow the instructions on the guide linked above.

Anyway after all my work was over I had a nice light desktop running enlightenment17 or "e17" for short over all I like it. its on par with  XFCE performance wise but its also a step up due to composting and other effects which really give this DE its own flare. Right now other then the google talk plugin this is near perfection, hell I even have Teamspeak3 on here and I did it with less pain then I did on ubuntu. (Well after installing Yaourt) Everything works as it should: with out question

So here is how it looks: 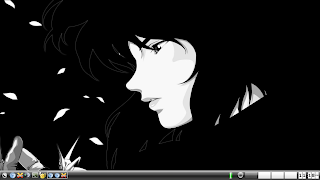 Over all I am giving arch a 9.5/10 you cant beat the ammount of control it gives you over your system. If your willing to build from the ground up you are in essence building your own OS. Sounds like fun to me.

Thanks for reading.
Posted by Unknown at 9:16 PM No comments:

From here to there and back again


I suppose the history lesson of Linux is not something any of us need, after all if you are here you either know me personally or have found this blog from the various sources on the net (Including the 5+ linux forums I am on.)

This post is more or less me kicking things back in drive again with my personal history lesson:
I have been all of the place and borked many a system in the name of exploration. In most cases I just re-installed my OS and left the issue be. I love linux for that very reason. No need to get a new license if you want to tinker with it.

The time line of my techno lust:
-High on coffee beans (Ubuntu)-
Around three years ago I started using Ubuntu I had just got a new laptop and I had used Linux up to that point. Very very very outdated versions of Linux mind you (Like OpenSuse 3) So my experience was not all that good to that point.

I happened upon Ubuntu in the early fall of the year before I had it downloaded and copied to a dvd that I kept in my laptop case for close to five months forgotten and alone till I found it again popped the DVD in one day during a study hall at school and thought "What the hell I can give it a shot and see if I like it.." We can say that the study hall ended WAY TO FAST because I barely got back to reality in time to get to my next class. Thankfully I only had two more to go through before I could be home testing this out.


As soon as I got home i plugged the laptop in and decided to install it. Its at this point i met a close friend of mine and ubuntu advocate Elizabeth Krumbach (pleia2 on dat IRC) Later on in time (By about 6 months) I was invited the Ubuntu 9.10 release party. I could not get a ride to the place and she lived local so she offered a ride and I gladly accepted. It was a night I will be remembering for quite some time. (I remember the Tobasco Beer O.o not that I had any I was too young at the time) Suffice to say this was my true dive into Linux. To that point it had been people talking in a virtual chat room about cool things and hacking. It was after meeting some of these people that I wanted to work closer and start getting more involved.

-Time to freshen things up with Mint!-
After a while the Ubuntu crowd started to move toward a less traditional desktop (Unity) which I did not like as much as I should have(Late on found out it was pretty cool). So instead of just installing a new desktop I went strait for a new OS. Linux Mint. Which I met some pretty cool people:
-Kuja
-Clem (The man behind the Mint)
-Tim Ford
-John Wagner
-Dmitry
-Todd Wiltz
-Cliff
-Shantorn
As well as ALL the other people I talk to on a daily basis whom I am to lazy to note down here (Sorry if I missed anyone you all know I try to keep feelings neutral)
My tenure with mint lasted about a year, then they switched to gnome 3 which I LOVED the idea of but my computer could not handle it.  So I packed up again only this time I did not drop all contact. I stuck around the IRC for mint (As I still do today)

-Under the Arch of freedom-
Yeah this part is about Calvin and his OS for masochists (Arch Linux) to be quite honest if I was not looking for something that would not break when I updated it, arch would still be my favorite simply because of the sheer power you have over it. Arch to me is like the De facto ultimate bad ass of the bad ass systems. However as we all know arch has a habit of being bleeding edge which is okay if you are willing to bleed into it as well. I spent about three months messing with arch and I loved every second of it because with a system like that there is no perfection, just what you want. If I was to ever build my own Linux Distro it would really be a coin toss between arch and ubuntu.

-cd /home-
The title if kinda significant because anyone in Linux knows that /home is where you exist on the system. What this means is that through all of this, I ended up back on the door step of the OS I left behind. When I walked back in I was greeted with familiar faces and a warm fireplace to relax in front of as if nothing changed. If anyone asked where I had been I simply said "I was out exploring, and I have returned enlightened" Granted I stuck to regular Ubuntu for about a week and just recently re-installed XUbuntu which I am growing to love more and more now.

The conclusion:
If there was one thing I learned in my distro hopping days. Its that no matter what system you are using, or what desktop. You are still using linux. You are still part of something amazing. Something that you can see evolve right infront of you. The difference between being a user and and being something more is merely what you are willing to put into it. That to me, as cheesy as it may seem, is a great feeling. That is why I use and will continue to use Linux.
Posted by Unknown at 1:36 PM No comments:

How to get geany to use python3 as its default


How to get Geany to use Python 3 by as the python version default
Step 1.)
After installing geany you want to go into the terminal and enter this:
"sudo <text editor here> /usr/share/geany/filetypes.python"
Doing so will ask for your password and subsequently bring you to a text file for geany's python      settings

Step 2.)
Go to the bottom of the file and comment out the bottom two lines (Just add a # infront of them)

Step 4.)
After you save it the next time you open your python script in Geany you will be able to run (f5)
and use it as python3 (Assuming that is what you code in)